Something I hadn’t expected with a trail as long as the PCT was the difficulty in assimilating all the things you see and all the things you do as you go along. In the morning you get up, strike camp, eat breakfast and go; the rest of the day is spent hiking, eating, drinking, getting water, taking occasional detours into the bushes, until you’ve done your miles and found somewhere to camp, when you pitch your tent, cook and eat dinner and go to bed. And all the time the experiences are piling up, and the photos are piling up, but you’re not really putting them into any order or perspective in your head because already the next experience is happening, or you’re just too busy thinking about how long until your next rest stop and what you’re going to pull out of your pack to eat, or how much your feet hurt, or how tired you are …

Which is my way of saying I don’t know where to start with describing what’s happened since our last proper blog entry 670 miles ago. So, because our photos are all in date order, unlike my memories, I’ve picked out a few photos from the last part of and all of which I hope will help to tell the story.

We were lucky for a long time – wildfires broke out behind us on the trail (not our doing, honest) and sections of trail were closed, but nothing got in the way of our progress north until we came across this sign near . It meant an extra 11 miles of hiking and a 3000 foot descent and re-ascent, but what could we do? The Breitenbush Trail was a hideously steep and rocky descent, there was a long roadwalk split by a night camping in a layby, but the Red Lake Trail which took us back up to the PCT was actually quite scenic. However, when we got to Olallie Lake Resort on the PCT and heard they were about to close the next section of trail and evacuate the resort, we decided to disappear into the woods and head quickly north rather than get taken away by the forestry service and lose the continuity of our hike.

We’d had cold nights on the trail in the in June, but when this photo was taken on the 30th August we really felt that autumn had come. We woke to thick frost on the inside and outside of our single skin tarp-tent. For the first couple of hours of hiking, we were in thermals, fleeces, hats and gloves. We had other cold nights afterwards but none as damply chilly as this.

From northern  to the middle of , we followed a succession of volcanoes which dominated the landscape and provided some of our best views on the trail.

Quite possibly our favourite section of trail. Spiky mountains, alpine meadows with lovely flowers, ascent of a mountain followed by a dramatic descent of Knife Edge Ridge, packed into a 26 mile day – we found a campsite by a lake just as it was getting dark. A really exhilarating day.

Folks on the trail had warned us about weather – rain and hill fog, no views, wet vegetation slapping around your legs and face … Well, we had 4 weeks of perfect weather except for one night and the following day, when it did this. We had 4 passes of over 6000 feet to go over. At the top of each pass it was snow, in between it was sleet or heavy rain. No matter, Neil loves bad weather, I finally got to use my waterproof jacket which had been serving only as a pillow since a couple of days in southern , and all went well until we had to hitch a lift out from to resupply. Would anyone pick up two very wet and cold and somewhat muddy hikers? Thank goodness for Casey in his old banger of a pickup, on his way back from court for a driving offence …

Our feet hurt. We knew the old disused PCT route featured two hair-raising log crossings over fast flowing rivers. On the sign at the junction of new and old PCT routes someone had written “No log Xing”. But it would save 8 miles, we could just take a look. Of course we had to give it a go! The first log crossing didn’t look well used but it was OK, we would just have to hope that the second log crossing which would take us across another river in about 4 miles time would also be possible. And it was, though there was no way we were going to walk across it! 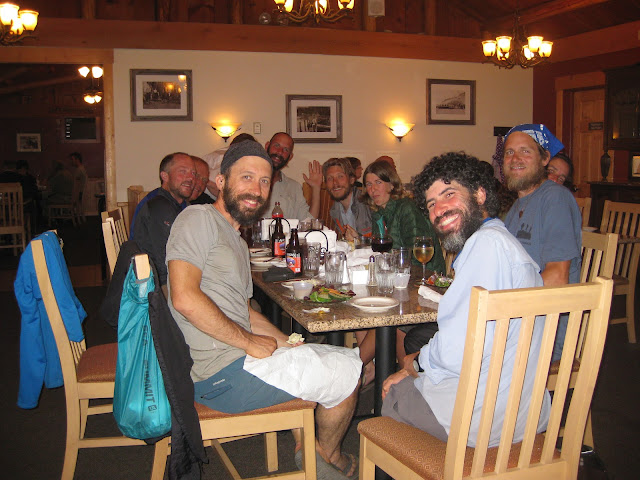 Our final resupply was at a lake resort called Stehekin – a real oasis with good food, beer, ice creams, a bakery, and free camping. And as it turned out, a whole bunch of trail friends there too. JohnT and Greg were leaving just as we arrived, and we ended up having dinner with (from left to right): Neil, Ken, Hand Poet (foreground), Train, Scalpel, Rabbit, Gourmet (front), Moose, Peru (behind Moose).

The Canadian border at last! An odd and anticlimactic end to a fantastic hike. You come down a hill into a forest, pop out of the trees and there’s this monument in the middle of nowhere. You still have another 9 miles and 1000 feet of ascent to go to the trailhead at , the nearest civilisation. There’s nobody else around except for Neil who’s feeling poorly. So you take some photos, drink your bourbon as planned, sign the register and plod on. The beneficial effects of the bourbon last most of the way up the hill but not all the way to . By the time you get there, you’re hobbling from your blisters again, Neil’s had to lie down a few times to avoid passing out and looks like a ghost, has all the character and charm of a Travelodge, but who cares, we have a bed ….
Posted by Neil Pacey & Tanya Savage at Saturday, September 29, 2012